The endless opportunity to bend a specific situation and the ‘what if’ question you pose on the different sides of the narrative are there… floating in your mind. As we grow our wisdom and knowledge through research and evidence and tons of books available out there, we become a more morally conscious being in the world we are living in.

Learning the past is as important as living in the present

We are standing on what was then a concept or a land that had long been seeking for freedom. This time, it is not a fictional society but a harsh reality that we are enjoying the fruits of labor and sacrifices of the unsung heroes. All the ones that had built the foundation of our society for hundreds and thousands of years. Now, our task is to remember and learn from the great and the unheard stories of the events that have occured, and honor the individuals before us.

Looking back on the many tragedies that happened no more than 80 years ago – the World War II and the extermination of millions of people during the Holocaust – completely unretractable lifetime damage to the world. Due to the anti-semitism or discrimination against the Jews and Germany lossing its position in the war, a political party was going to take over the country to organize mass killing for the sake of racial purity, political, and ideological reasons. While this rather drastic political agenda was happening, some volunteers from different walks of life and political leaders within the global community did their best to stand up to the terror and became instrumental in the prevention of the death of many. Among the list of the many public servants that fought and resisted the brutality, the late Spanish commercial attaché Ángel Sanz Briz provided assistance to some 5,000 Jews. According to the BBC news, “he [helped] thousands of Holocaust survivors and their descendants escaped the Nazis.” The humanitarian efforts he had made during wartime around 1944 did not only save Jews from persecution and give shelter to the countless families, but it was also considered an act of integrity to protect people albeit contradicting to the Spanish government’s stance on inhumane killings. During his assignment in Hungary, Sanz, along with the Swedish diplomat Raoul Wallenberg, worked hand-in-hand to provide formal documentation for security and integration of families into their new homes in Budapest.

Among the list of the many public servants that fought and resisted the brutality, the late Spanish commercial attaché Ángel Sanz Briz provided assistance to some 5,000 Jews. According to the BBC news, “he [helped] thousands of Holocaust survivors and their descendants escaped the Nazis.”

Now, his bravery and actions beyond duty and responsibility, is shared across to many in Spain and across the world. Last Tuesday, 25th of January, Alkor welcomed the daughter, Ángela Sanz Briz, and other family members of the late Spanish diplomat for the international day of commemoration in memory of victims of the holocaust. The students from 4th of ESO attended their talk and asked a few intriguing questions about the risk and hardships that Briz had to go through while rescuing the Jews, the welfare of the survivors including food, education, lodging, and healthcare, among others. As the representatives of each class lit the candles toward the end of the program, a short period of silent thought and prayer was offered to the people who passed on during the Holocaust.

In light of the event, the 4th of ESO students put together an exhibition putting some other details that contextualize the history. They also watched and provided a short narrative of the true-to-life story of the Boy in the Striped Pyjamas. 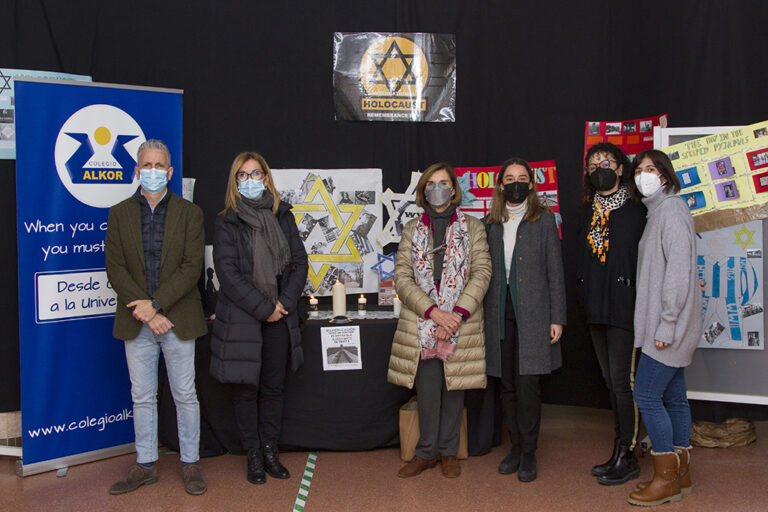 In today’s fast-paced world, having a vast knowledge of the past would help us to have a deeper understanding, empathy, and open mind to the stand of our society. We must not forget to pay tribute to the sacrifices of the many who exemplify such inspiring qualities for humanity. A few of them may have been forgotten already, some may have been well-regarded yet unknown to new generations. The wide range of information is already at the palms of our hands, and our way to carry out a decision for our future is to learn and understand the past to give the benefit of hindsight.